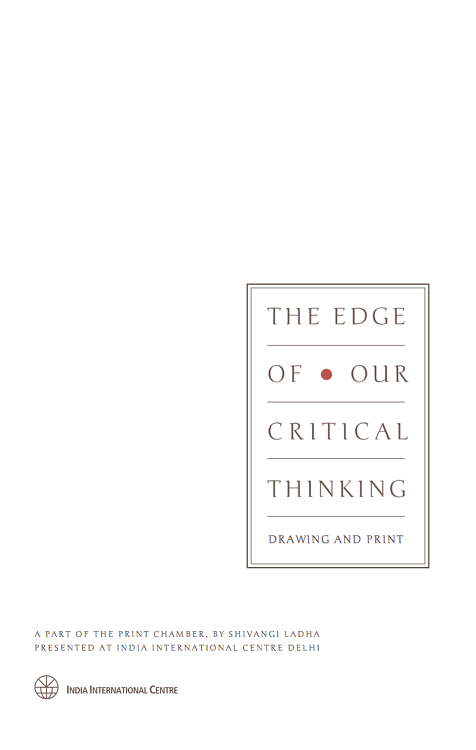 WITH A FINGER IN THE CLAY, I TRACE THE WORLD

We are gifted with bodies populated by interpretive and imaginative muscles; a meat made wonderous when met with creative stimulus.

The act of observational drawing is a dynamic ballet in which the external object filters through our creative sinew and exits a profoundly unique subject. It is important to note that we are not cameras, and the generation of a drawing is not the same as taking a picture. The input-output machinations do not come with a simple click. The processing time of our making requires, paradoxically, something of an observational unmaking – a breakdown of the object into a stitching of anatomical parts, a topography of values, a distillation of essence. This deconstruction process affords the drawing an infusion of us, an artist’s stain – for in the reconstruction, we be the glue. This cognitive and emotional ingredient that we, as artists, provide is what separates our messy and boundless creative ability from the technical representation produced by a camera.

Our individual points of view are important to consider, for we as individuals introduce a cacophonous soup of influence that form much of the DNA of our creative work. Aside from our solitary physical distance in space from our chosen object - our emotional and cultural narratives, focal hierarchies, decisions on which details to include or exclude: a whole subjective noise of choice helps render our drawn output. With that in mind, the concept of representational accuracy with regard to drawing is no longer simply a technical exercise – but an active and vital summation of subjective choice and constraint.

With regard to constraint, our technical ability (or possible lack thereof) is relevant and can play a role in distinguishing our work from our intention, however there are constraints inherent to our cognitive input that are worth exploring. A circumstance of our bodies is that our observational mechanisms are confined to the relay of our senses. Working in tandem, our sight and touch afford us some experiential knowledge of surfaces, but spatial relationships are outside of our grasp. We cannot touch all of our visual landscape, we cannot hold the shadow fallen on a face. However—be it through the edge of a stylus, nub of a pencil, the cratered hunk of charcoal - drawing is our best way of touching an image, or more technically, feeling the wholeness of an optical experience.

This Phenomenological experience afforded to the artist through the practice of drawing can seem esoteric, or even solipsistic, from the standpoint of the audience encountering a drawing – however, much like a delicious meal lovingly prepared with good fresh ingredients, the potency of care can translate through the richness of seeing a drawing as well. It only requires a willingness to savor our visual experiences with the same appreciative sensitivity reserved for expensive meals.

The presence and engagement of a viewer completes a cyclical dynamic of creative fluency and growth. Part of the power in drawing, is that it is outside the boundaries of spoken or literal language, and thus a visual discourse must be a collaborative one – a fluid, living event in which the orbit of the artist and the orbit of the viewer create an ecosystem around the creative artifact. That ecosystem, terraformed by subjective narratives, cultural and intellectual criticism, emotional swells and reflex – all of that mess and stuff each participant contributes storm together in an alchemical slurry to produce the shimmering bridge of connection between the bodies we pilot. Value is born from such storms. Culture emerges from such slurries.

In Collaboration with Shivangi Ladha.

On the Evolution of Heavenly Spheres, 2013

The Polish National Archives in Warsaw contains a small and, now, all but forgotten manuscript. This small set of loose leaves, entitled De evolutionis orbium coelestium in the Kostolewski archive, is generally believed to have been written by Nicolaus Copernicus (1473 – 1543). It has no date, but Polish researchers have narrowed down the creation of the manuscript to the last decade of Copernicus’ life.

The manuscript was bought from an unknown source, in the mid-18th century, by Count Kasimir Augustus Kostolewski. He was an ardent collector of Poloniana, and had an extensive and extravagant private museum on his estate of Kostolewicz, rivalling that of the Czartoryski establishment. What remained of the Kostolewski collection after World War II was nationalised and became state property.

De evolutionis is short and terse; a set of instructions for a kind of dance, for two women, an exercise in drawing the “perfect sphere”. The women are to continue at their efforts until the drawing surface is entirely covered. Little has been written about this manuscript, and it is therefore thrilling that two artists have undertaken to perform this dance. In his On the Revolutions of Heavenly Spheres, Copernicus calls astronomers “artists”: and although that term had a very different meaning in 16th century Europe, in which the seven liberal arts were marked by the absence of manual labour, it is nevertheless clear that Copernicus’ dance resembles in all respects a contemporary art performance. What was Copernicus trying to say with this manuscript? Spheres and circles of course, fascinated him. He believed that out of “all the varied literary and artistic studies upon which the natural talents of man are nourished, those above all should be embraced and pursued with the most loving care which have to do with things that are very beautiful and very worthy of knowledge. Such studies are those, which deal with the godlike circular movements of the world and the course of the stars, their magnitudes, distances, risings and settings, and the causes of the other appearances in the heavens; and which finally explicate the whole form. For what could be more beautiful than the heavens which contain all beautiful things?” This statement by itself cannot convince the reader; for the attempted circles in the filmed performance are manifestly imperfect; in fact, their imperfection, repeated over and over again, serves to erase the circles and to create a void, a blackness of imperfection. Why would Copernicus pose this contradiction?

We must delve deeper into his writings. In a particularly illuminating passage, Copernicus admits that “let no one expect anything in the way of certainty from astronomy, since astronomy can offer us nothing certain, lest, if anyone take as true that which has been constructed for another use, he go away from this discipline a bigger fool that when he came to it.” This sentence is not just the frank admission of a rational scientist; Copernicus was intensely religious (being a Canon of Frauenburg), and his writings are laced with a faith-based humility. It must, finally, not be forgotten that he, in a letter to Pope Paul III, said that “my labours will be seen to contribute something to the ecclesiastical commonwealth, the principate of which Your Holiness holds.”

From this, now, a picture begins to emerge. It is more than likely that our little manuscript, with its set of instructions, was actually meant as an allegorical performance. Its meaning may have been to symbolize man’s imperfect yet laudable endeavors in trying to achieve wisdom, perfection, and grace, through flawed yet diligent effort. In augmenting and redrawing circles, in an effort to reach perfection, the opposite is achieved; the great unknowable, and the knowledge of man’s infinitesimal smallness in the universe.

For whom was this allegory penned? These kinds of performances were common in princely courts of the 16th century, at pageants and festivals. Copernicus had no strong ties to the Polish royal court, or that of the neighboring Holy Roman Empire or the realm of the Teutonic Knights. The most likely patron was, in fact, the Papal State of Rome, the greatest centre of literary and artistic activity of that time. Apart from the visual and intellectual interest of this allegory, Copernicus was probably trying to curry favour with the Pope, to soften the reception of his controversial On the Revolutions of Heavenly Spheres.